Hookers holding Louisville back from being ranked 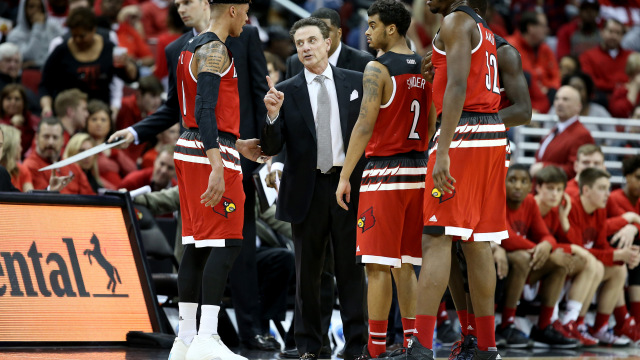 Some headlines beg to be investigated.  One never knows where value can come up from nowhere.  Well on the APEX Basketball we will plunge to any depth to get that betting edge.  This weekend, Rick Pitino asserted that his Louisville team is not ranked because of blowback from hookers.  Bad pun but you get the drift.  Is America and maybe even the linsemakers giving Rick’s men short shrift and if they are, do we barge in the door bets firing?

One escort says that many were paid for sex.   A prized recruit that went nameless seems to provide independent verification of her story.  Now we have eleven of the so called call girls lining up to sign documents saying it never went on.  With all this being bandied about, Rick took to the airwaves with disbelief that his team is not ranked.

Appeared in the Courier – Journal

“I think people are looking at that and they’re not really studying the team. We had the best recruiting class, I think, in college basketball, as far as I’m concerned. If you include Damion Lee and Trey Lewis, plus Deng Adel, Ray Spalding and Donovan Mitchell – Kentucky taught me how to get into the one-and-dones, and I’m doing it now, except I’m waiting for fifth-year guys instead of high school kids.”

Here is the homework to handle over the week.  Does Coach Pitinio have a point and America is under valuing his team?  Well they get a stern test with their game against the Michigan State Spartans on Wednesday.  Do the work and get ready to pound the line when it comes out at Americas Bookie.  We will be back on Wednesday to tell you which way we lean.  Good fortune and see you in the middle of the week here at APEX Basketball.